Cell invasion and migration that occur in cancer metastasis is rooted in the ability of cells to navigate through varying levels of physical constraint exerted by the extracellular matrix (ECM). Cancer cells can invade matrices in either a protease-independent or a protease-dependent manner.  It is not straightforward to collect evidence of protease-dependent cell invasion. Although the ECM-degrading activity can be visualized by synthetic hydrogels which are fluorogenic upon proteolysis, or by using cells with fluorescence reporter genes for ECM-modifying proteases, the synthetic fluorogenic hydrogels are usually not commercially available and may not fully recapitulate the natural ECM, while the transfection of reporter genes is incompatible with many primary cells (e.g., patient derived cells). Additionally, although second harmonic generation microscopy has been employed to visualize the fibrillar ECM structure without labeling, it is not sensitive enough to detect the ECM digestion at the molecular level. 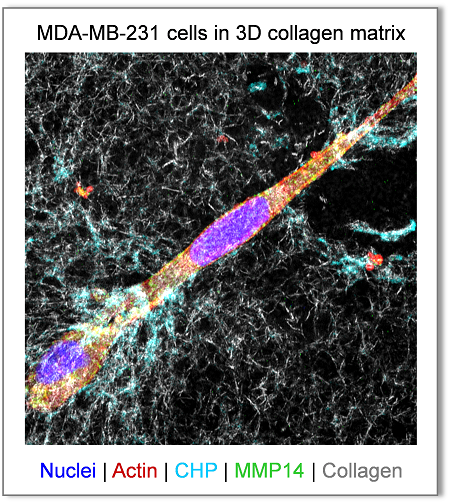 As demonstrated in our 2018 Biomaterials paper,[1] 3Helix's F-CHP and R-CHP can robustly visualize the pericellular collagen turnover caused by proteolytic migration of cancer cells in vitro within 3D collagen hydrogels, without the use of synthetic fluorogenic matrices or genetically modified cells. The degraded collagen fibrils in the hydrogel are directly labeled with CHP through triple helical hybridization, whose signals are readily detected by standard fluorescence confocal microscopy (above). The CHP signals (cyan) are localized in close proximity to the surfaces of the MDA-MB-231 cells which are rich in MMP14 (green), a rate-limiting collagenase in contact-dependent proteolysis and migration. 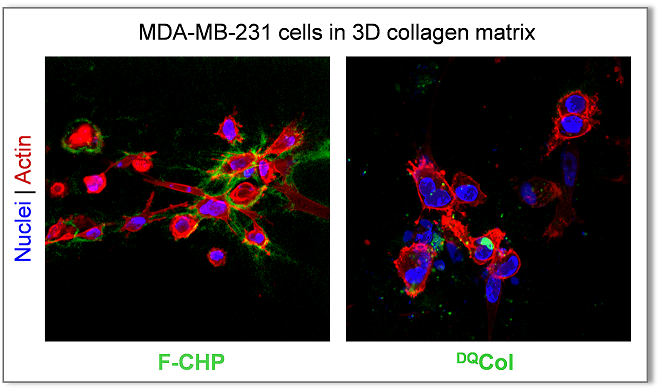 CHP's advantages over the conventional DQ Collagen (DQCol, a collagen substrate with excessive FITC-labeling that only becomes fluorescent upon proteolysis): after one day of culture, while the signals from F-CHP staining showed the fiber like morphology in the pericellular space, the DQCol signals lost the characteristic collagen-fibril morphology and appeared as aggregated spots inside the cytoplasm.[1] This is because unlike CHP, the cleaved fluorescent fragments of the DQCol can detach from the collagen fibers and be internalized by the cells.

For cell biologists, CHP is a unique and powerful tool to collect evidence of protease-dependent cell invasion, which will advance our understanding of the molecular determinants of cancer invasion. In addition, the CHP probe is well suited for visualization of a variety of remodeling events in 3D collagen cell studies, such as vascular sprouting, skin inflammation, and macrophage polarization, as well as on modern tissue culture platforms, including organoids and organ-on-a-chip.